77 degrees in February is quite an oddity.  When it happens, you better get outside and document it.

That is exactly what my daughter, Izzy and I did.  We ventured off to the local playground to burn off some energy and take advantage of the incredible natural light we were given.  Subconsciously, I had strategically picked a red outfit for her that would really make her stand out and pop in the photos we were going to capture.

I packed up my camera, loaded with just a 35mm lens, got Izzy strapped into her carseat, and just like that, our adventure began!

Upon arrival, we realized we were not the only ones who sought out the opportunity to spend sometime outside.  There were several other parents with their children, running around the playground, something I had to keep in mind and plan each shot around.  This was Izzy’s first time at the playground, so I let her wander around a bit to get a feel for the playground, get comfortable around the other kids, and see what interested her.  As I followed her around, I kept track of the sun’s direction and how it hit certain areas of the playground, this way I immediately knew which direction to shoot her from when the time came.

After circling the younger kids section of the playground once, Izzy decided to hop onto a spring loaded, rocking frog.  So I helped her on and showed her how it was meant to be ridden, showing her to rock back and forth on it.  She got a feel for it, but was timid to really push it to its limit.  This was completely fine, it just made it easier for me to catch her in focus, as well as not having to worry about her hair moving into her face after I had moved it off to the side.

An easy shot to capture, a great way to start off this day, but I really wanted to catch her genuine look of excitement as she explored the playground for the first time on this beautiful day.  So we moved on.

Izzy loves to swing, which is what led us to the next location.  The swings were the most challenging of shots.  She is too young to swing on her own, so I placed her in the toddler swing and pushed her to get her going.  The challenge for me was to capture a proper field of view from in front of the swing, while trying to keep her in-motion and fix her hair in-between pushes, as well as timing her position in relevance to my focus point.  Not to mention, trying to not get hit by the swing as it came back down.

This was by no means an easy task, you need to be a master of multitasking and timing to keep track of everything you are doing and the order to do them in.  But finally a nice genuine look of excitement, her hair may be a mess but it shows the motion of the swing.

Swinging was exciting for about a whole five minutes, luckily that is all I needed to catch the shot.  I took her out of the swing and she was off to find the next exciting thing, the tunnel.

Izzy began running through and around the tunnel.  I crouched down at the end and began to frame up my shot.  In the background, I started to hear other parents talking about my maneuvering around the playground and how great these shots probably looked.  If you ever catch me with a camera in my hands, you will never see me take a shot standing up straight, always crouched, leaning forward, arched back, or leaning off to the side, photography is my workout, and I feel the burn for days after.  All this maneuvering to get the right perspective is what helps to make a good photo great.

As I watched Izzy playing in and around the tunnel, I got a vision of an adventurer who has just found a tunnel and is cautiously exploring it.  So I sought to capture that scene.

What really helped in capturing that scene was the fact that she was too tall to stand up in the tunnel, so she needed to slightly crouch down, giving that sense of caution as she made her way through the tunnel.

And as if the other parents were not already taking note of my dedication to get these shots, I crawled into the tunnel myself to capture her discovery at the end.

Even though she knew what rested at each end of the tunnel, she still enjoyed going back and forth through it, and even rested inside for a moment before moving on. 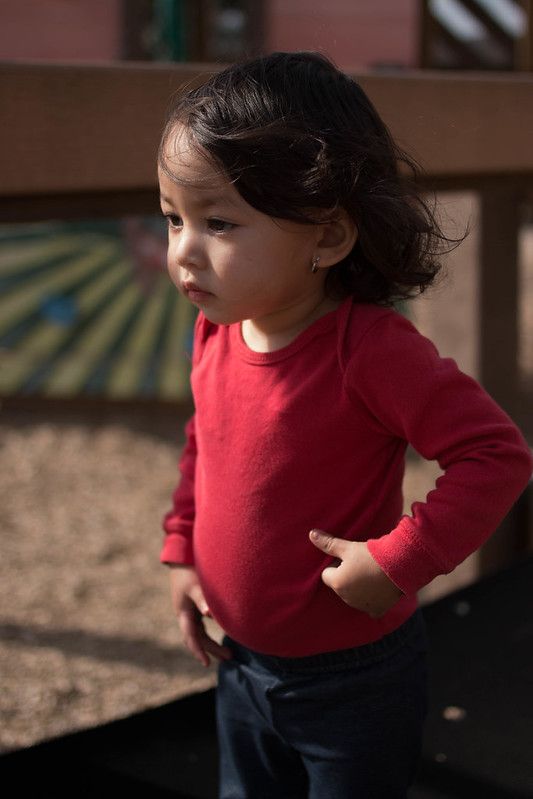 Her wanderlust for the playground was nowhere near fulfilled.

There was still so much to see, and Izzy wanted to see it all.  She looked around and examined the area to find her next obstacle.

At this point, Izzy had only explored a small portion of the playground, there was still so much uncharted territory.

And just like that, we were off to the big kids section of the playground, where Izzy could prove herself worthy to roll with the older kids. 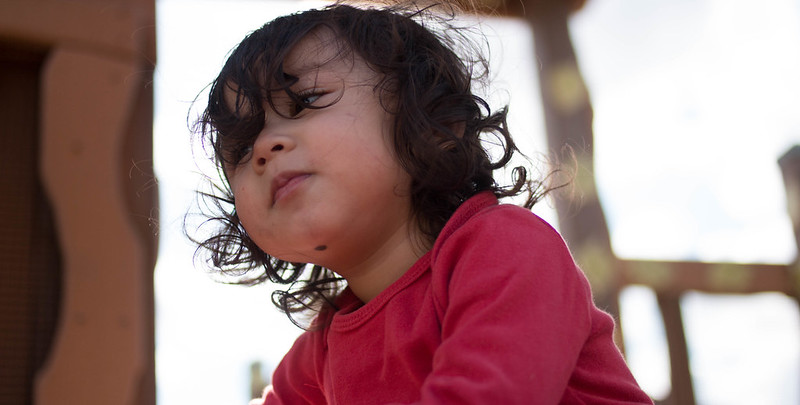 Izzy truly has no fear, climbing obstacles twice her size, and attempting to run up the slides.  A true adventurer at heart, I wonder where she gets it from…

I have unsuccessfully been trying to show Izzy that you come down the slide and then run around and climb up to come back down.  It may take her awhile to understand this concept, but that did not keep her from enjoying the slide.

What child does not enjoy feeling as if they are on top of the world, that they have just climbed the highest mountain they can find; which is what provided this authentic look of accomplishment atop of the slide.  I wanted to portray this further by giving her the hero perspective, have the viewer look up to her as she takes in the view of the playground from the highest point.  This perspective allowed me to capture her almost strictly against the sky, and really separate her from the background.

That look of enjoyment and excitement may have been lost with her lack of smiles, but I believe this shot portrays a defined sense of accomplishment, and an excellent conclusion to her first day at the playground.